Exmoor was the first area in the UK to be designated a dark sky reserve, and remains one of the best areas in the UK for stargazing due to the lack of artificial light over the moor. 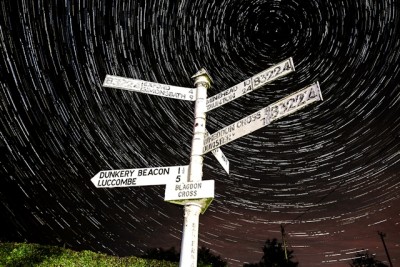 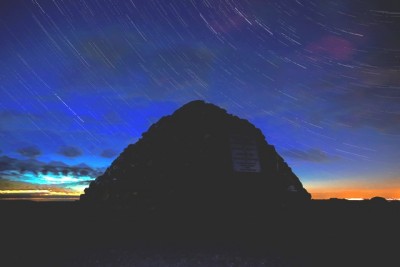 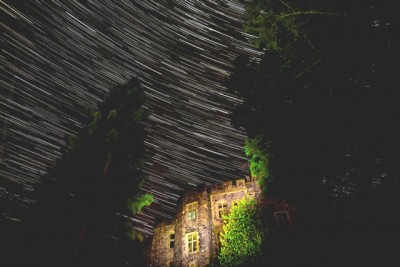 Finding your way around the night sky

This is a “potted version” of things that I have found on the Web; I hope you find it useful and Happy Stargazing…Maybe come and join us one day!

There is a wealth of useful information on the web., but remember to type in UK to make sure it is geared to the Northern hemisphere sky. I usually search  “what is in the sky tonight UK ?” or go straight to

I always use “Go sky watchP”  which is a completely free app, easy to download. You enter a nearby city, for us, Bristol is quite adequate, and then point your ipad or phone to the sky to see where to find planets, constellations etc.

A handy search facility top left tells you what is currently visible for the date and time (not allowing for cloud cover!) and points the direction to follow to find it, you can even turn on sound so that when the arrow reaches the object it is solemnly named for you!

Due to the orientation of our earth in its orbit, we Exmoor stargazers have an area of space called the circumpolar circle which is always visible to us, and once the easier constellations here have become familiar friends, then other areas are easy  to identify as you can use these for orientation.

The first constellation to identify is The Plough, also known as The Big Dipper, part of the constellation of  Ursa Major, the Great Bear, and, occasionally, called  the saucepan which is a more accurate description of the shape of it!

The two stars of the saucepan’s bowl point to the North Star or Polaris which is almost, but not quite, at the northernmost point of our sky. If you follow the same two stars in the opposite direction they point to the constellation Leo, The Lion, and the handle of the saucepan points to Arcturus, which is the fourth brightest star in the sky.

The second star in the saucepan handle is actually twin stars, which can be picked out with binoculars.

Follow a line from the saucepan to the other side of Polaris and you will find Cassiopea , the Queen seated on her throne, she is a classic W of five stars and circles around Polaris opposite the Plough.

The Andromeda galaxy lies just within the circumpolar circle, out beyond Cassiopea.

In the south of an Exmoor Autumn sky the most distinctive constellation is Pegasus, with its box of four stars forming the body of a winged horse. The sides of the square are about the width of a clenched fist across, with little visible within the square. Follow from Polaris to Cassiopea to the top left hand corner of the Square of Pegasus. Refer to a good sky chart to see how these shapes transfer to a winged horse as its not obvious!

Stargazing in winter on Exmoor is chilly but massively rewarding as Orion, The Hunter, comes into view in October. He can be seen in the south with his very obvious belt of three stars with two stars spaced above and two below. The Orion nebula is a glowing cloud of gas just below the belt and just visible to the naked eye. The star to the top left is called Betelgeuse which also forms the winter triangle along with Sirius, below, the brightest star in the sky, and Procyon.

Above and to the left of Betelgeuse are the celestial twins Castor and Pollux.

On Exmoor summer nights The Summer Triangle can be seen, formed of three stars, Deneb, Vega and Altair.

Deneb also forms the tail of Cygnus, The Swan, which is also known as the Northern Cross, and flies along the line of our galaxy, the Milky Way, with its head pointing to the star Antares and its tail pointing back to Pegasus. Albireo, which marks the head of the swan, is much fainter than Deneb but beautiful to view through a telescope, when it can be seen to be actually two stars, one amber and a smaller blue green one, usually regarded as the most beautiful double star in the sky. 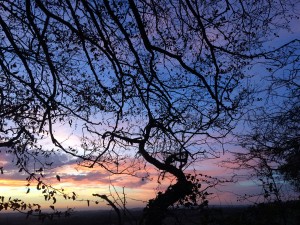 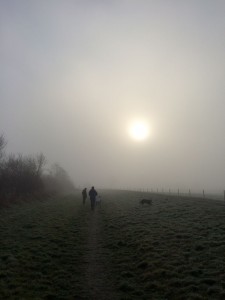 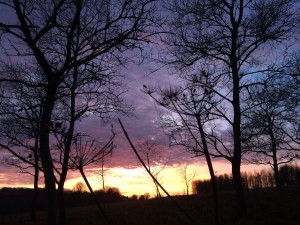 The planets of our solar system orbit the sun in the same way that our planet earth does, but at different distances from it. We therefore see the planets (and the sun) along a line called the Ecliptic, at different places in the sky depending on the time of year and time of night. This is predictable but complicated as they are superimposed on the stars behind them which are much further away. A good app is invaluable for telling you what you can hope to see and where it is! Planispheres and star charts become more useful as you start to learn your way around the sky.

Closest to the sun and tiny, it spins very slowly on its axis, taking 59 days to turn once, and takes 88 days to orbit the sun. It can sometimes be seen with the naked eye in the evening sky.

Next is Venus which is easy to spot in the twilight hours when it is called the morning or evening star. It goes through phases so that it can sometimes be seen as a crescent through a telescope, like our moon, and takes 225 days to orbit the sun. Uniquely It takes even longer to spin on its axis, at 243 days.

We take 365.25 days to orbit the sun, which is why we need a leap year every 4 years to catch up! We have a slight tilt on our axis which is why we experience different daylengths in winter and summer and why the southern hemisphere is on average warmer than the northern hemisphere. We take 24hrs to spin on our axis, the angle of tilt varying the length of “day” or sun exposure as our area of the globe turns to face the sun.

Other planets also have moons, some more than one, and they are characterised by moving on an orbit around their particular planet. Consequently our moon rises and sets at noticeably different times each night. These times can be looked up on the web very easily for your area. The moon is “locked” into our gravity so that it rotates on its axis at the same rate at which it orbits the earth, consequently we always see the same “face” of the moon and never see “the dark side”. As the moon orbits the earth we see more, or less of it illuminated by the sun. When the moon is between the earth and the sun we can’t see it and this is called a new moon. It then becomes a waxing moon, a thin but growing crescent low in the western sky after sunset. The first quarter is half illuminated, and then it is called a “Gibbous” moon either side of full moon. The waning moon crescent rises in the morning sky slightly before the sun.

Simple binoculars will show a lot of detail on the surface of the moon, particularly the “seas” or “mares” that are actually lava filled and solid, and some beautiful craters.

A total solar eclipse happens because, remarkably, the moon is 400 times closer than the sun, but the sun is 400 times larger than the moon, so on the rare occasion that the three are in perfect alignment, the little moon is capable of blocking out the mighty sun!

Because the moon is actually on a slightly elliptical path, an “annular eclipse” can occur where a ring of sunlight shows around the shadow of the moon

The moon’s cycle is 29.5 days and this gives rise to our calendar months

A rising moon will sometimes appear red because the moonlight is filtered through more of the earth’s atmosphere and this scatters the blue light leaving more of the red to enter our eyes.

The October moon is often called the Hunter’s moon, probably because when the moon is high in the south at midnight, Orion the hunter is completely clear of the south eastern horizon for the first time since last winter.

The Terminator is the zone between the dark and the light side of the moon and is a good place to look for detail with binoculars.

Mars is known as the red planet as it has rust in its rocks and deserts and looks red through a telescope. It takes 687 days to orbit the sun and 24.5 hours to spin on its axis. It has 2 moons.

The asteroid belt Between Mars and Jupiter is comprised of lumps of rock orbiting the sun, they are left over from the formation of our solar system some 4.6 billion years ago.

Beyond the asteroid belt, the planets change from being small and rocky to being large and made of gas and liquid. Jupiter takes 11.9 years to orbit the sun, and takes nearly 10 hours to spin on its axis. It has 60 plus moons!

Saturn and its rings are one of the most spectacular sights through a small telescope. Each ring is made up of countless millions of frozen lumps varying in size from icebergs to snowballs, orbiting Saturn like so many tiny moons.

Uranus can just be seen with the naked eye, if you know where to look, but was not discovered until 1781, when William Herschel first noticed it through his telescope in his back garden in Bath! It appears as a small green disc through a telescope, obviously non star like, but with little detail as it is shrouded in clouds.

“The blue giant”, Neptune was discovered when early in the 19th century, astronomers noticed that something was pulling Uranus slightly off course. It can be spotted with binoculars with the help of your app and has 14 moons. It takes 164 years to orbit the sun and 16 hours to spin on its axis. 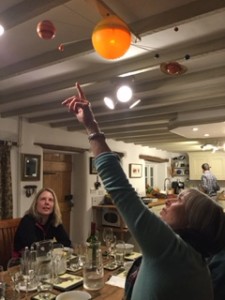 comets are tiny, icy cold lumps of stony stuff. When ice on their surface comes closer to the sun it vapourises and small amounts of their debris fall into our atmosphere where it burns up to create a shooting star. When the earth moves through a belt of these bits of debris, then we get a meteor shower such as the orionids in mid to late October.

On a clear Exmoor night you could expect to see up to 5 shooting stars an hour normally, and up to 26 an hour during  a meteor shower…..magical!

stars do not twinkle when seen from outer space. Their light is reflected, bent and twisted as it enters the earth’s atmosphere and therefore they seem to twinkle, unlike planets, which shine with a steady light as they are much closer to us and take reflected light from the sun.

The brightest star is Sirius, the dog star in the constellation Canis Major, and not the Pole star, as often thought.

Sirius has a magnitude of – 1.5,  the moon – 13 and the sun – 27. Vega has a magnitude of zero, the pole star +2, Venus -4 and Saturn +1 at their brightest, when they are said to be “in opposition” to the sun. Thus negative magnitudes are actually brighter than positive ones!

The naked eye can generally see a magnitude of +3 in urban areas and +6.5 in Exmoor Dark Sky reserve.

M 31 is the Andromeda Galaxy

One light year = 9.5 trillion km, the distance that light travels in one year.

The Aurora Borealis  is a result of the Solar Wind…charged particles released from the sun are deflected by the earth’s magnetic field such that some particles follow the magnetic field lines to the North and South poles, giving beautiful waving  coloured sheets of light in the sky. Although best seen close to the poles these have been seen from Exmoor and other dark skies in the UK.