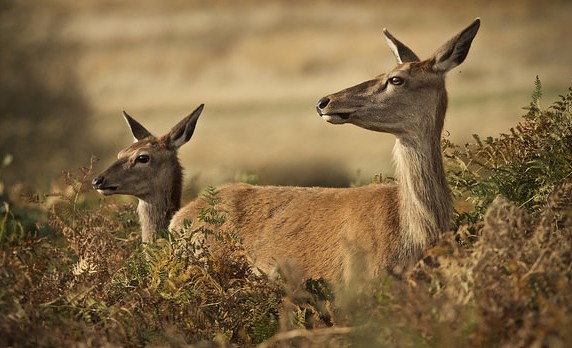 Red deer calves  (red deer are not generally referred to as fawns) are born from mid June onwards on Exmoor, usually as singles although twins are not unknown. They are born dappled with pale spots to camouflage them under the trees and in the heather of the moor but these will have gone by mid August when the calf is more able to fend for itself.

The mother stays with the calf during the day and will sometimes give them away with her gruff warning bark if you stray too close to their hiding place, she won’t move very far away unless frightened by your presence so it is important to leave a youngster undisturbed if you are lucky enough to find one….Mum will be just there somewhere. 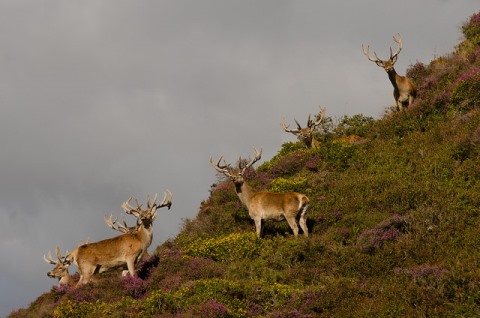 Calves are entirely dependent on their mothers until mid August and young stags stay with the group of hinds until their antlers start to grow at 2 years of age. They then go off to join other young stags and at 3 years old are ready to join the fray in the hunt for hinds of their own.

Stags and hinds run in separate herds except during the rut in October and young males without antlers can be identified amongst the hinds by their generally darker colour and broader heads.

Unlike cattle and sheep the horn must be grown fresh every year and antlers shed in March and April are eagerly searched for on the moor. They are very hard to find and it is possible that the deer themselves eat them for added nutrition although this has never been proven. During the shedding (“mewing”) period the stags are very secretive and hard to spot, as if they know how vulnerable they are without their antlers and hide away accordingly. 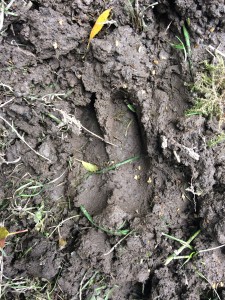 In the Spring and early Summer their whereabouts can sometimes be given away by finding a “soiling pit” or pool nearby, a wallow made in a muddy and shady spot where they roll and cover themselves with mud against the midges and flies. Nearby trees will often have coarse hair and mud scratched into them and the classic deer footprints can be seen in the mud: 5 cm across at the heel marks a stag of 4 years plus.

The new antler points start to grow immediately and are so sensitive that the stag can’t bear to catch them in the scrub and so they emerge into the open again.

During August the velvet covering the new antlers becomes very itchy and stags look for young trees, called “fraying stock” on which they rub the velvet off. The beautiful new white horn weathers to brown, leaving just the points white and ready for action during the rut!

October is an exciting time to be on Exmoor, as the moor resounds with the sound of “Bolving” or “Belling” stags trying to sound larger and more attractive than the next chap. 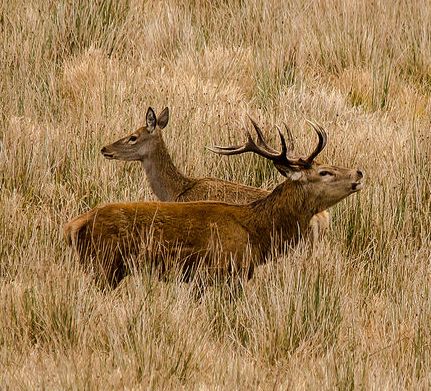 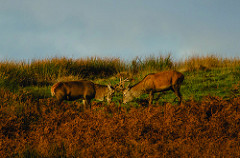 The hills and valleys of Culbone, Horner,  Molland and Simonsbath are good places to head for in the “dimpsy” gloaming of an Exmoor evening…..make your bolving convincing enough and the stags will roar back, sometimes even coming to investigate their rival……
Maybe safest to stand well behind a fence!
Joking apart, the rut is the one time that the stags are more dangerous than normal as the adrenaline and testosterone are flowing, so sensible to keep your distance.
Please respect the notices if some parts of the moor are closed off at this time of year, it is for the welfare of the herds and to give them some privacy at this important time. 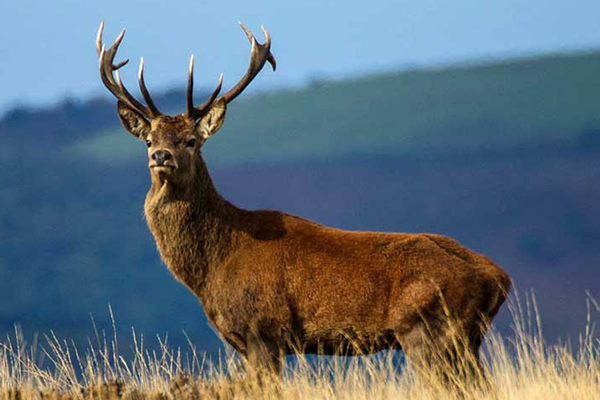 Exmoor is one of the last remaining strongholds of our native red deer species….standing up to 6 foot tall to the tip of their antlers they need a lot of space to thrive.
They cause terrible damage to farmers’ crops if they run short of grazing on the moor. Two deer will eat as much as four sheep or one bullock and they don’t wait to be invited onto the pasture….the gaps  they force in a hedge or fence become a permanent passage called a“rack” and allow the farm animals to escape onto road and moor.
One stag can quickly destroy a field of crops such as turnips as they are inclined to take a bite, pull the whole plant up and then chuck it to one side and go for the next one in the row. The hinds are not a lot better, taking 2 or 3 bites out of each root in situ before moving on to the next one, and apples are swallowed whole from the tree, along with a goodly serving of precious bark…. it’s not surprising that Exmoor farmers and gardeners have a slightly ambiguous approach to these beautiful beasts.

Stag hunting on the moor goes back to the 16th century and probably earlier and is a mainstay of both the economy and recreation of Exmoor residents. Visitors still enjoy the spectacle of the hunt setting out for the day and the hounds, although only allowed to hunt in pairs, do a useful job in tracking down injured and elderly deer so that they may be destroyed humanely. 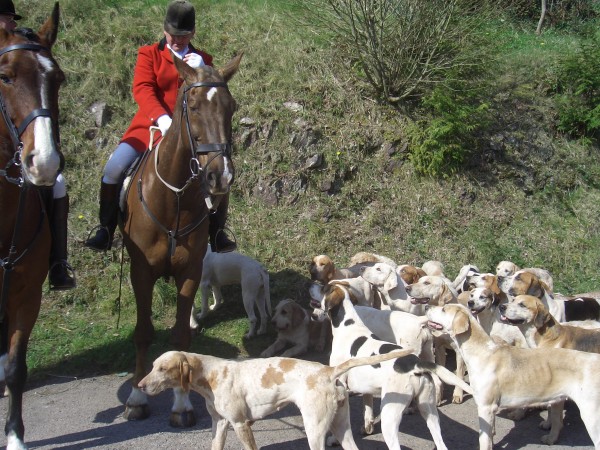 The season starts with the opening meet around August 12th  and stags are hunted until the end of October. The hounds are then kennelled for a few weeks during the rut, to allow nature to take its course and then hinds are hunted until the end of February.
It has been observed that the stags seem to know when their turn is over, and will stand and watch the hinds being hunted with relative unconcern for their own safety.
Spring staghunting runs from March 1st to the end of April.

Many references to the old days are found as you go out and about on Exmoor so I will explain some of the old terms that you may come across;

A “warrantable” or “runnable “ stag is one of 4 years of age and older, suitable for being hunted.

A “harbourer” was employed by the hunt to establish the habits and whereabouts of such a stag, so that a suitable animal may be found at the start of the day. Much of what we know about wildlife today was learnt by men such as these, spending their lives studying a particular species. For example, a stag will commonly recruit an “apprentice” young stag which it hangs out with until hounds are pushed into the covert to flush them out. The old stag will force his apprentice and any number of other young stags and hinds out first, before eventually breaking covert himself. It took great skill on the part of the huntsman not to send the hounds pounding off after the wrong beasts altogether. When hunted a stag will almost always run to use a waterway as cover or protection, and there are tales of them escaping hounds by lying submerged with just a nose poking out of the water surface….clever beasts indeed.
“Tufters” are the first few hounds sent in to flush the stag out at the start of the hunt.

The ages of male deer are described as follows 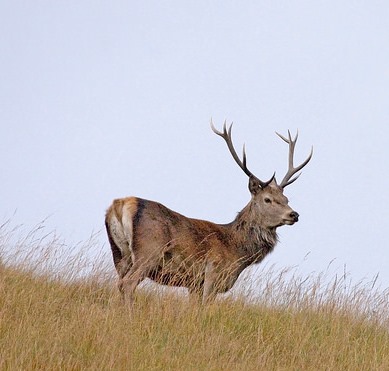 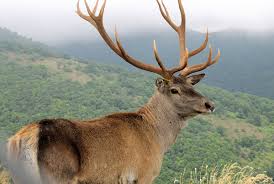 A Spire or Pricket is up to 3 years and a Staggart is up to 4 years old.

A stag or warrantable deer is over 4 and a Hart is older still. A “Hart Royal” has been hunted by royalty and lived to tell the tale!

Generally females are hearsts in the first year and young hinds in the second.

Both teeth and antlers can be used to age deer; the latter rather more useful in the field!

“All his rights and -so many- on top” refers to the basic antler of the four year old deer, with a “spire” or “beam” of approx. 35cm long bearing the “brow” spike and the “bay” alongside.

At 5 the stag will usually have the “trey”, and therefore full “rights”

At 6 generally his rights and 2 points “atop” on 1 horn, 3 points on the other and by 8 years will have 3 points atop of each horn. These two magnificent stags are at least 8 years old.

Nutrition and health affect antler development and so the above can only be a rough guide.

A “Nott stag” is one that has failed to grow antlers at all. He will often grow bigger and stronger than other stags because he does not have to use energy to grow antlers that are shed and regrown every year. He is perfectly able to sire offspring but never grows antlers himself.

Both older males and very old hinds grow tusks in the upper jaw . Their teeth deteriorate as they get older and are usually the cause of death in an aged animal….they literally starve to death as they can’t eat enough to sustain themselves. On Exmoor these deer are generally hunted and humanely killed before reaching this sorry state, and rarely live beyond 15 years of age.

With many thanks to Kevin Atkins for editing this page for us!

Other Deer Found on Exmoor

Of course the red deer is quite rightly the deer most associated with Exmoor but other species live here too!

Fallow, or Park Deer, as they are commonly called on Exmoor, are not native to the UK but were introduced to ornament deer parks back in the Middle Ages. They must have seemed very exotic back then with their immensely varied colouring and more delicate physique, the venison is also quite different in flavour from the red deer. On Exmoor most of them are escapees from Dunster Deer Park, and indeed this is a great place to go to see Fallow and Roe deer, maybe followed up with a cream tea in Dunster or a pint of Exmoor Ale at the Lutterell Arms. Several footpaths crisscross the park and the route over the iron age hill fort has fabulous sea views and across to Dunster castle.

Feral Sika deer are particularly unwelcome on Exmoor as they are the only alien species that can interbreed with the native red deer. Those that are here are related to escapees from the Pixton Estate deer park and look very different from red deer, being smaller with shaggier coats and more upright antlers. The stags do not roar like the red deer, sounding more like a rusty grating gate hinge….not the same at all! 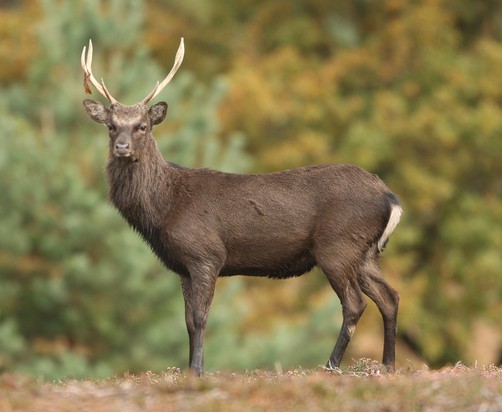 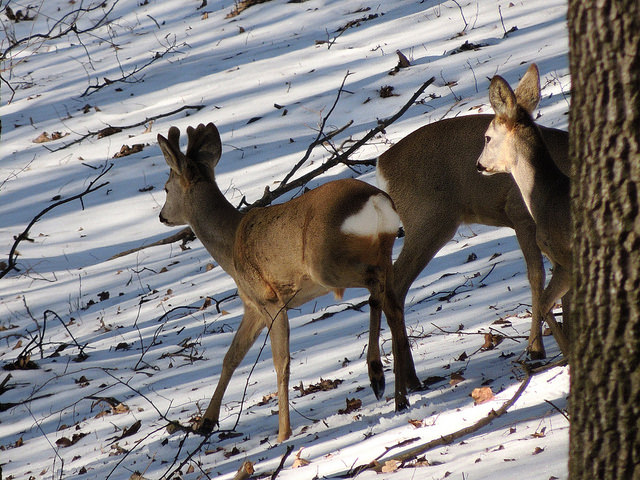 Roe deer have made quite a home for themselves on Exmoor in the past 50 years or so. They are the only other truly native deer in the UK, although they had to be re-introduced following extinction here in the Middle Ages. The increased planting of woodland and control of foxes by gamekeepers has allowed them to thrive locally and they are very different from the red deer, weighing in at less than 25kg compared to the red’s potential 160kg. Their Latin name, “Capriolus” translates as “little goat” and is very appropriate as they bound away through the heather with their little white fluffy rumps bobbing along.

The last variety of deer that may be seen on Exmoor are very different again.

The Chinese muntjac are very small, standing only about 50 cm at the shoulder compared to the red deer’s 120 cm. They can occasionally be seen to the east and southwest of Exmoor and are almost certainly the result of the release of captive deer from elsewhere.

They are commonly mistaken for a dog as they scurry away into the undergrowth as they are pretty well labrador sized. 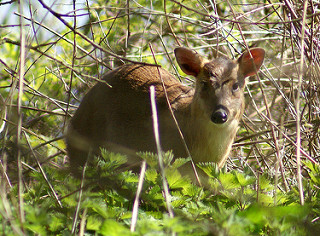